Laparoscopic Management of Polypoidal Lesions of the Stomach

Aim: Our aim was to study the feasibility of a laparoscopic approach in the management of polypoidal lesions of the stomach.

Results: Of four patients, three were males and one was female in the age range of 40–60 years. Presenting symptoms ranged from generalized weakness, episodes of intermittent vomiting, dyspepsia, and weight loss. Common sites involved were fundus and body of the stomach in three patients and antrum in one patient. Surgery via a laparoscopic approach was the mainstay of the treatment. Final histopathology revealed gastrointestinal stromal tumor (GIST) in three patients and adenomatous polyp in one patient. Patients diagnosed with GIST were further referred to a medical oncologist for mutational analysis and adjuvant therapy. All patients are on regular follow-up postoperatively.

Conclusion: Asymptomatic, polypoidal lesions of the stomach can present with occult GI bleeding or gastric outlet obstruction. The main point to be taken into consideration in treating large-sized polyps is the selection of management option (endoscopic vs laparoscopic). Laparoscopic excision is a better alternative to treat giant polyps considering the size, location, and potential for malignancy, as opposed to an endoscopic approach.

Polypoidal lesions of the stomach are broadly defined as locally elevated lesions protruding into the gastric lumen, a heterogeneous group of epithelial and subepithelial lesions that vary in histology, neoplastic potential, and management, usually small and asymptomatic (>90%). Symptoms produced by polypoidal lesions are vague and nonexistent until complications arise such as bleeding, anemia, obstruction, or abdominal pain.1 They are discovered incidentally on endoscopic examination in about 2–5%.2 The frequency of polyps is increasing with the widespread use of endoscopy for diagnosis and treatment.

We present a review of laparoscopic management of four cases of polypoidal lesions of the stomach who presented in our center from December 2017 to December 2018. All patients underwent routine preoperative workup along with upper GI endoscopy and a CECT scan. Three patients underwent wedge resection of the stomach using a laparoscopic linear stapler and one underwent laparoscopic anterior wall gastrotomy with polypectomy under general anesthesia. Workup and management of all four patients are depicted in Table 1. 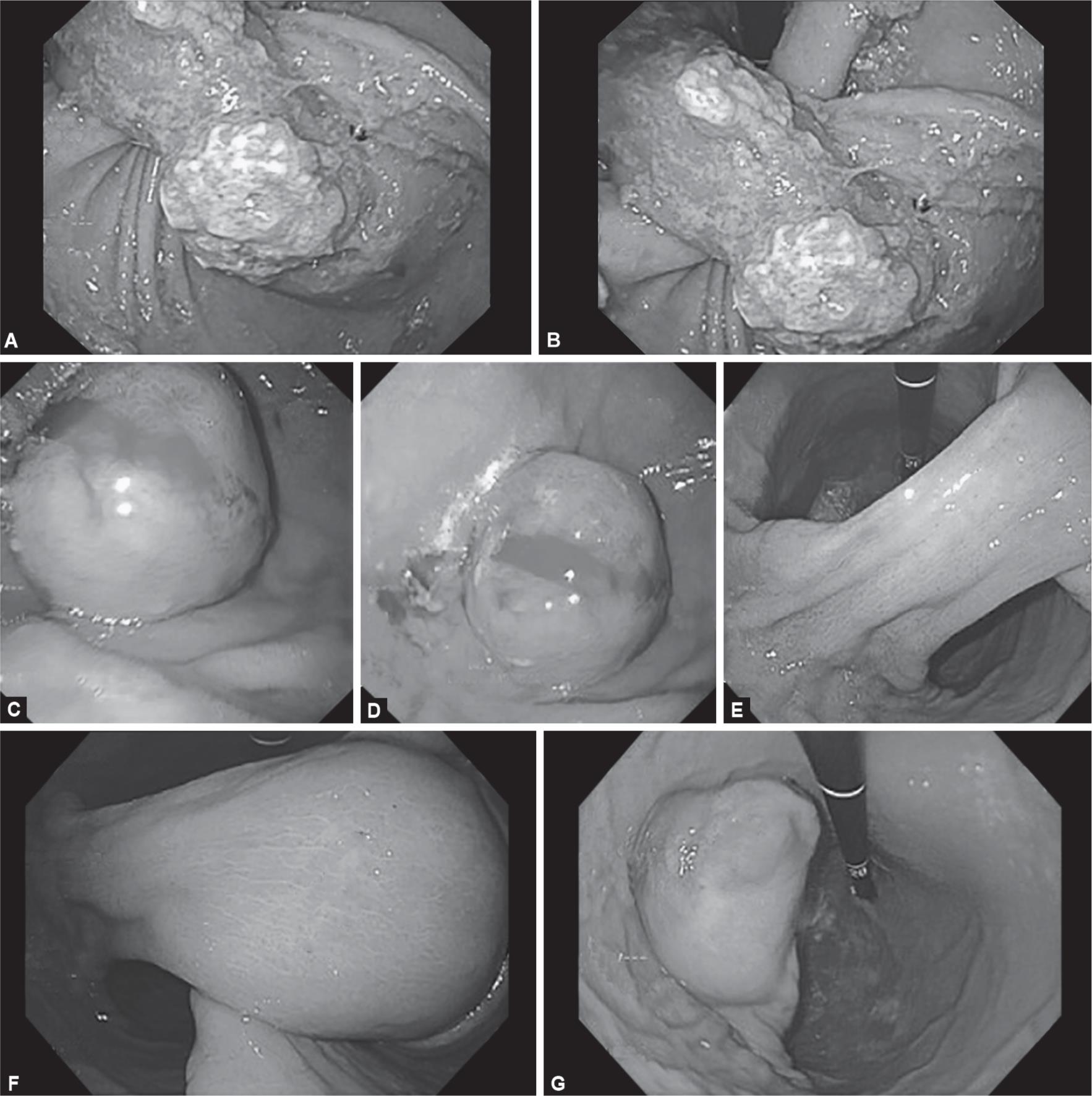 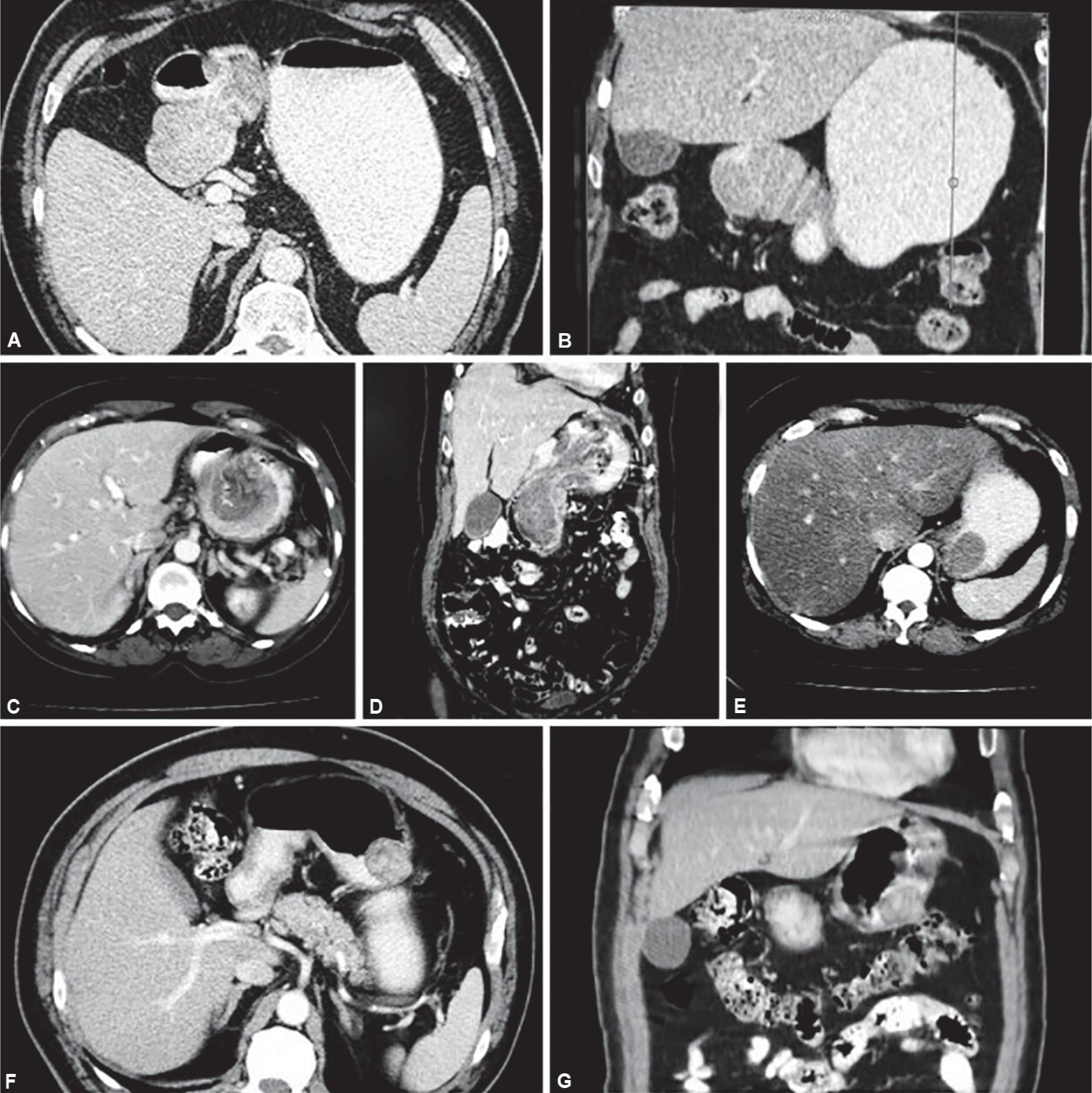 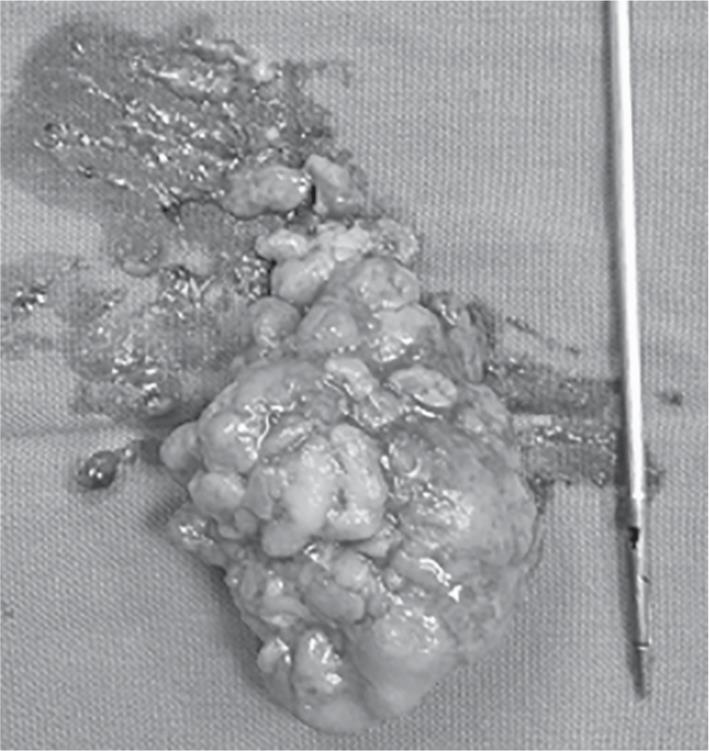 In all cases, hemostasis was confirmed at the end of the procedure, and the 10 and 12 mm ports closed under direct vision.

Of the four patients, three were males and one was female in the age group of 40–60 years. Presenting symptoms in all ranged from generalised weakness, episodes of intermittent vomiting, dyspepsia, and weight loss. Common sites involved were fundus and the body of the stomach in three patients and antrum in one patient.

Table 1 gives the details regarding esophagogastroduodenoscopy (OGD scopy), biopsy, CT scan findings, surgical procedure undertaken, and final histopathological diagnosis in our four patients. Postoperatively, our patients received IV antibiotic and PPI for 5 days. All had good postop recovery with uneventful course and were discharged on soft diet by day 8.

Histopathologic slides were evaluated by the same pathologist and patients are on regular follow-up with yearly check upper GI endoscopy. Patients with GIST were referred to a medical oncologist for mutational study and adjuvant therapy.

Giant polypoidal lesions of the stomach are uncommon, and detection of polyps at upper gastrointestinal endoscopy is usually an incidental occurrence (2–5%).4 Research reports showed that the polyps occurred equally in males and females and that two-thirds occurred in the age group above 60 years.5

Histologically, they are classified as hyperplastic, inflammatory, adenomatous, and fundic gland polyps. Hyperplastic polyps are the most common, accounting for 85–90% of all cases. Adenomas account for only 5–10%, and less than 1% of these lesions are reported to have malignant changes.6 While gastric polyps are commonly asymptomatic, they can cause dyspepsia, epigastric pain, or present with complications such as bleeding due toulceration, anemia, and gastric outlet obstruction.

Rate of malignant transformation depends on size and histology. Fundic gland and IFPs have virtually no malignant potential. The risk of malignancy has been reported to be 0–8.6% (mean 2.1%) for hyperplastic polyps, approximately 5% for tubular adenomas and 28.5–40% for villous adenomas. So definite histopathological diagnosis is vital and mandatory.7

Gastrointestinal stromal tumors are rare tumors of the digestive tract, with an incidence of about 1.5 per 100,000/year (50–60% in the stomach). The average age of occurrence is 60–65 years with equal gender distribution. Majority are CD117 positive, but 5% are negative and diagnosis is confirmed by immunohistochemistry tests that identify CD117 or DOG1. They arise from interstitial cells described by Cajal and are characterized by mutations of C-KIT and PDGFRA genes which help in precise diagnosis and targeted treatment.

Surgical resection is the mainstay for nonmetastatic tumors, most commonly in the form of a wedge resection. Treatment of GIST requires a multidisciplinary team approach consisting of pathologist, radiologist, surgeon, and oncologist.8

Basic treatment of polypoidal lesions of the stomach is excision, either endoscopic or surgical. Surgical treatment is recommended in polyps greater than 2 cm, sessile polyps, and failure of endoscopic treatment.9 Incidence of gastric outlet obstruction due to polyps is unknown, with only few cases reported in the literature.10

Though rare in occurrence and majority being asymptomatic, polypoidal lesions of the stomach can present with anemia, occult GI bleeding, or gastric outlet obstruction. We presented a review of four cases of polypoidal lesions of the stomach with special attention toward their management via a laparoscopic approach. The main point to be taken into consideration in treating large-sized polyps is the selection of management option (endoscopic or laparoscopic). Because of their malignant potential, histopathological evaluation is mandatory.

The main disadvantage of endoscopic methods is the risk of incomplete tumor resection. Also, the procedure becomes difficult with an increase in polyp diameter and complications such as bleeding and perforationmay occur.

So, it seems that laparoscopic excision is a better alternative to treat such polyps, considering the size, location, and potential for malignancy, as opposed to an endoscopic approach.