Background: Hemorrhoidal disease is one of the most frequently encountered anorectal conditions in the clinical practice. A variety of instruments including circular staplers, harmonic scalpel, laser, and bipolar electrothermal devices are currently used when performing hemorrhoidectomy grades III and IV.

Conclusion: Harmonic scalpel hemorrhoidectomy appears to be a better procedure for symptomatic grades III and IV hemorrhoids with ease of operating due to less bleeding, less postoperative pain, and patient acceptance. Long-term follow-up with larger scale studies is required.

As a result, various types of surgical equipment have been introduced to overcome the postoperative pain and bleeding.

A harmonic scalpel is a device that simultaneously cuts and coagulates tissues by producing a vibration of 55.5 kHz. When compared with conventional electrosurgical devices, this ultrasonic cutting and coagulating device has advantages such as causing minimal lateral tissue injury 1–3 mm wide, less fumes, more localized impact,4 better hemostasis, less stimulation to neuromuscular tissues, and local control of the surgical site compared to a hemorrhoidectomy performed with surgical scissors or monopolar electric cautery.5

A prospective randomized study involving 50 patients who were operated for symptomatic grade III and IV hemorrhoids, in Sabah Hospital, Kuwait, between January 2017 and October 2017.

All patients underwent preoperative lab tests, chest X-rays, electrocadiography, and urinanalysis and were admitted to the hospital the day before surgery. All patients were fully informed about the procedure and possible complications, and a written consent was given. All patients had a glycerin enema the night before surgery and prophylactic antibiotics were injected before surgery.

All data were collected and analyzed using SPSS 2 version. Chi-square test and student t test were performed for comparison of groups. A p value <0.05 was considered as statistically significant.

The mean operating time of the harmonic scalpel group was 10 ± 0.7 minutes and 20.5 ± 2.2 minutes for conventional hemorrhoidectomy (p < 0.05). This difference was statistically significant and is shorter in the harmonic group.

There was no significant difference between group I and group II in terms of the number of excised hemorrhoids.

In the conventional group, one patient had minor bleeding on postoperative day 1; conversely in the harmonic group, no bleeding occurred for any patients.

One patient had urinary retention in group II and none from group I, the harmonic scalpel group.

Hemorrhoidectomy is one of the most common surgical procedures performed in Al-Sabah Hospital, Kuwait.

Hemorrhoidectomy is the most effective and definitive treatment for symptomatic hemorrhoids. 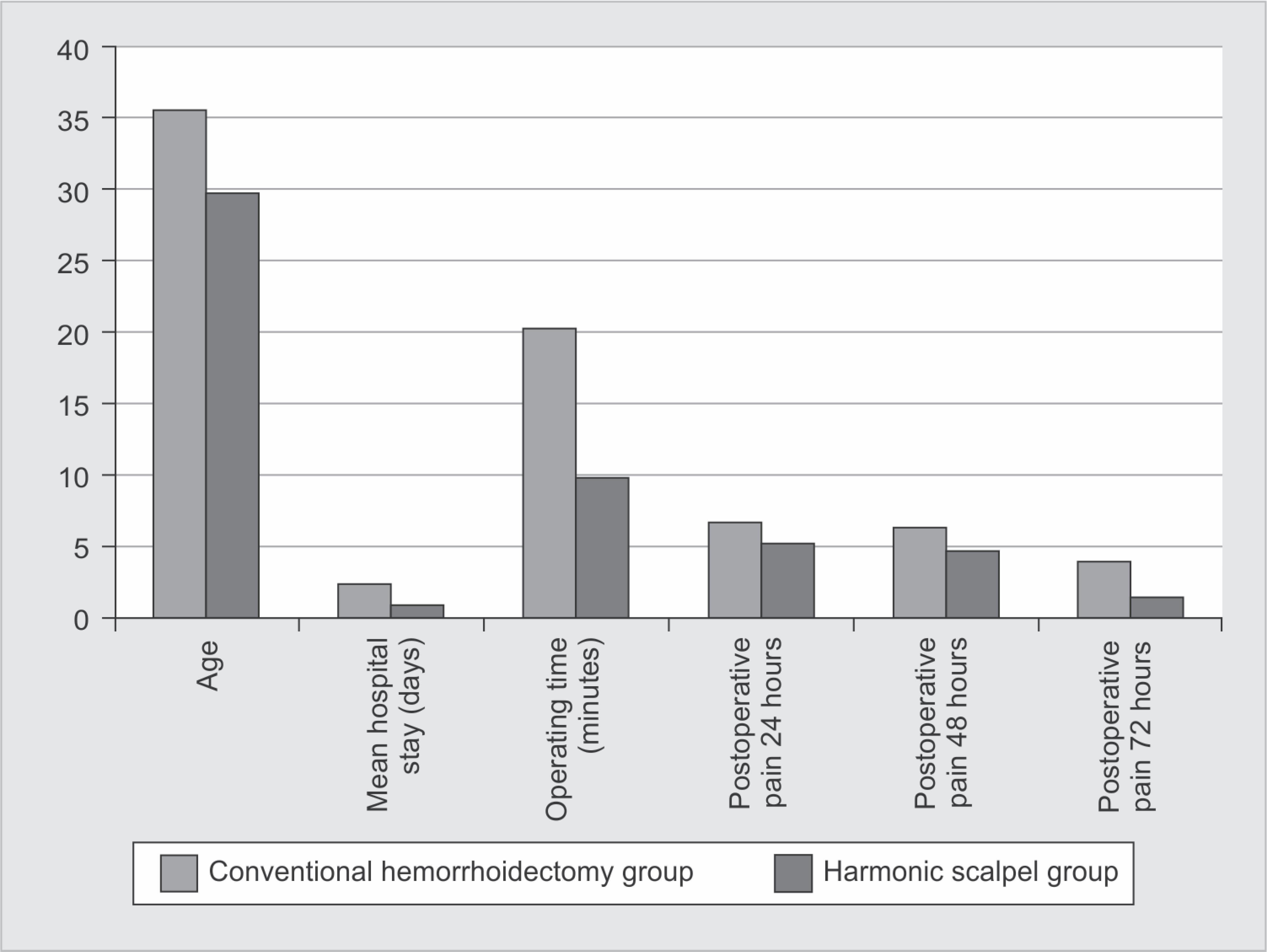 The harmonic scalpel is an ultrasonically activated instrument with sound waves as its source of power, which vibrates at a rate of 55,000 times per second. It is known for its ability to coagulate small and medium-sized vessels; thus potentially it may minimize postoperative swelling and edema to the surrounding tissue.11 The harmonic scalpel possesses the unique advantage of causing very little lateral thermal injury: <1.5 mm at the surgical site is translated into decreased postoperative pain.12

Pain following Milligan–Morgan procedure can be explained by positioning the ligature onto the vascular root of the hemorrhoid, while electrocautery and laser procedures cause significant heat damage to the sensitive perihemorrhoid area. Reduction of this heat is considered to be the main reason for decreasing the level of pain after harmonic scalpel hemorrhoidectomy. This study clearly demonstrates the superior pain control profile of harmonic scalpel in hemorrhoidectmy and less need for analgesics.

Another positive aspect of harmonic scalpel hemorrhoidectomy is good hemostasis. Harmonic scalpel has proved to be effective in larger blood vessels as explained by colorectal surgery.13

The harmonic scalpel hemorrhoidectomy requires patience for cutting tissues and for good hemostasis, since the ultrasonic scissors have a slower pace. It is important to avoid pulling the tissue during cutting. Pulling leads to cutting tissues without adequate hemostasis.

Harmonic scalpel hemorrhoidectomy is a safe and effective procedure with fewer complications compared to conventional hemorrhoidectomy. Long-term follow-up with larger-scale studies is required.