Safety and Efficacy of Laparoscopic Appendectomy in Pregnant Females

Introduction: Laparoscopic surgery during pregnancy is contraindicated absolutely or relatively through the last decade; however, laparoscopic appendectomy (LA) is still performed in pregnant women.

Materials and methods: Thirty-one pregnant females with a diagnosis of acute appendicitis and managed with LA or OA in the emergency unit of the department of general surgery from June 2015 to December 2017.

Results: Eighteen patients underwent LA, while 13 patients underwent OA. No difference was noticed between both groups regarding the operative duration, and fetal and maternal outcomes. However, the group of LA had faster first flatus and shorter inpatient duration than the OA group.

Conclusion: Laparoscopic appendectomy is distinguished with efficacy and safety procedure throughout pregnancy and should be considered a good replacement for open appendectomy.

Acute appendicitis is the most common nonobstetric condition requiring urgent surgical interference during pregnancy, with an estimated incidence between 0.05% and 0.13%.2

In this study, we assessed the safety and efficacy of laparoscopic appendectomy in pregnant females.

This retrospective was carried out in the emergency unit of the General Surgery Department, Zagazig University from June 2015 to December 2017. Thirty-one pregnant women were included in the study. All of them were suffering from abdominal pain in the right lower quadrant with or without fever, suggesting acute appendicitis. All patients underwent perioperative obstetric consultation and fetal monitoring. Complete blood count and pelvi-abdominal ultrasound were carried out to confirm the diagnosis and assess pregnancy. All preoperative data including age, history of previous section, gestation age at operation, and accuracy of the diagnostic U/S were recorded. Also, all operative data including the surgery duration, return time to normal bowel movement, inpatient length, postoperative complications, and final pathology were recorded. Obstetric and fetal data including the incidence of preterm labor, delivery type, and fetal mortality were also recorded.

The procedure was done in the supine position with a slight tilt to the left side (20–30°). The procedure was done under general anesthesia with maintained continuous end tidal volume CO2 monitoring. Insertion of a Foley catheter was also done along with application of pneumatic compression devices on the legs. A prophylactic antibiotic was administrated. Also, prophylactic tocolysis was administrated. We performed the operation by insertion of three ports. The first one, a supraumbilical 10 mm port according to the size of the uterus (3–4 cm above the uterine fundus) for the camera, was inserted by open method (HASSON method) to avoid injury to the uterus. Another two working 5 mm ports were inserted on both sides depending on the gestation age. Pneumoperitoneum by CO2 was adjusted to be (10–12 mm Hg).The appendix was elevated and the mesoappendix was divided using the bipolar diathermy or harmonic scalpel. The appendiceal stump was ligated using endo-loop or intracorporeal stitches. Retrieval of the appendix in a glove was done through the umbilical port site (Fig. 1). A drain was inserted to be removed after 1–2 days postoperative. 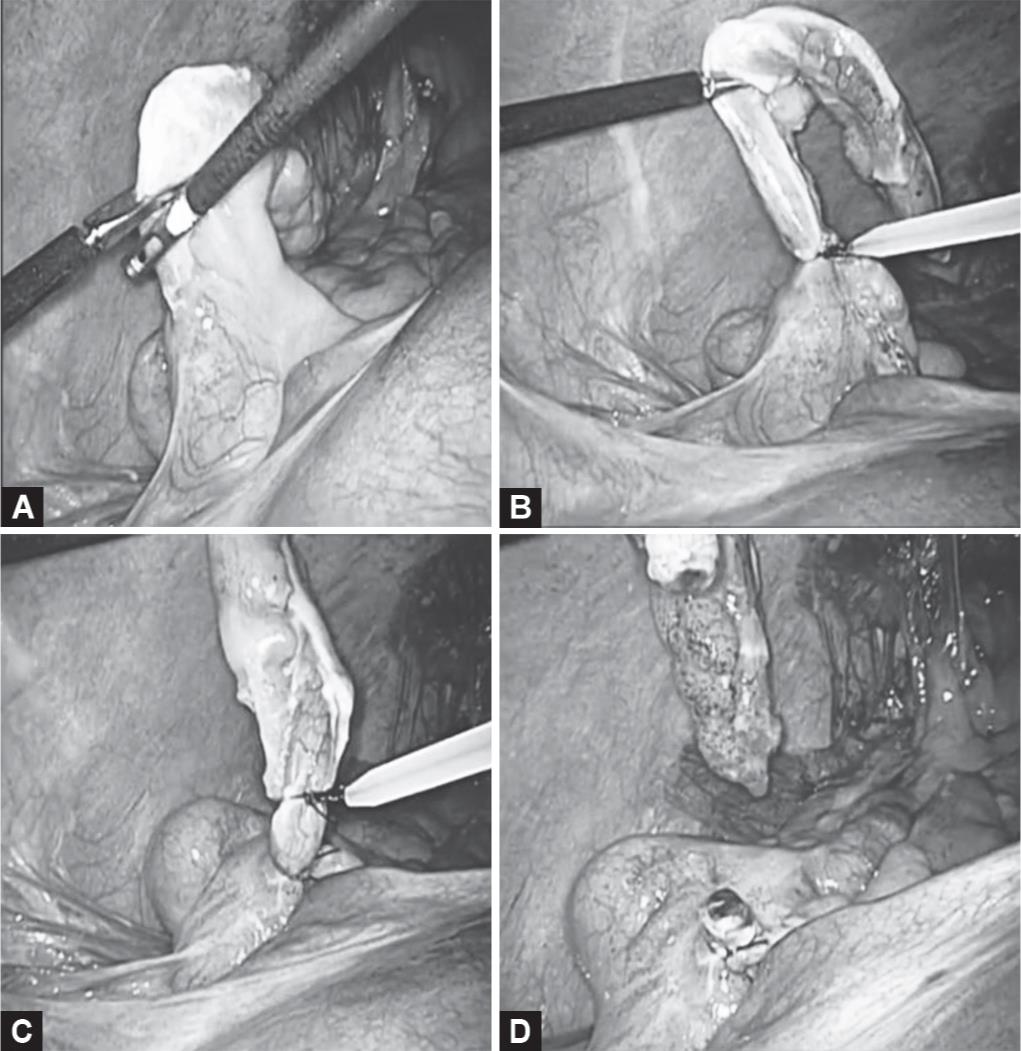 Data are presented as means ± standard deviations. Groups were compared using the Mann–Whitney U test or χ2 test, as appropriate. SPSS version 14.0 for Windows was used for all statistical comparisons, and we considered results to be significant at p < 0.05.

The duration of surgery in LA in this study was 40 ± 18.4 minutes, and in the OA was 45 ± 15.6 minutes. The time of the first flatus and the time of starting oral fluid were earlier in LA. Postoperative complications occurred in three patients. One patient developed intra-abdominal abscess two weeks after a laparoscopic appendectomy. She was 25 years old with gestation age of 25 weeks, was treated with application of US-guided pigtail, and antibiotics. She completed her pregnancy and delivered a healthy male baby by C.S. Two patients developed wound infection after an open appendectomy, and it was managed with repeated dressing and antibiotics (Table 3).

In our study, there was no mortality and all patients had uncomplicated deliveries. One patient had a preterm labor of a healthy female baby that entered the incubator for two weeks and discharged without comorbidity. The two groups had the same results regarding the fetal outcomes with no problems or morbidity (Table 4).

It was known that the change in the physiology and the anatomy during pregnancy made the diagnosis of acute appendicitis more difficult in pregnant women.7 The number of negative laparoscopic and open exploration rates during pregnancy ranges from 0% to 50% and 15% to 50%, respectively.1 In our study, the negative appendectomy rate was 16.13% (five patients) and it was 11.11% (two patients) in LA and 23.08% (three patients) in OA. In a study by Jun Chul et al., the overall negative appendectomy rate was 9.8% (9.1% for the LA group and 10.3% for the OA group).7

Diagnostic imaging studies are often used to clarify a confusing clinical picture. Ultrasonography is widely used as a first-line diagnostic test because of its safety for the mother and fetus and its relatively high sensitivity and specificity for many intra-abdominal processes. In our study, U/S was done in all patients; acute appendicitis was found in 77.78% (14 patients) in LA, and was found in 69.23% (nine patients) in OA. In a study by Chung et al., acute appendicitis was found in 15 (68.2%) patients in the LA group and 28 (71.8%) in the OA group.7

In the last decades, the treatment of choice for acute appendicitis during pregnancy was open appendectomy. But recently, laparoscopic appendectomy could be done in pregnant women with good maternal and fetal outcomes.13 Our study supported the safety of LA; the outcomes of LA and OA were the same. Moreover, some proven advantages of LA, including better intraoperative visualization, decreased surgical trauma, decreased gravid uterine manipulation, shorter postoperative hospital stay, and faster return to work, maybe even more important in pregnant women.14 In our study, the LA group had an earlier recovery of bowel function and shorter hospital stay.

Guidelines for laparoscopic procedures during pregnancy have previously been published by the Society of American Gastrointestinal and Endoscopic Surgeons (SAGES)15 and modifications were proposed by Moreno-Sanz et al.16 A pneumoperitoneum pressure of 10–12 mm Hg is recommended as previous animal studies have demonstrated fetal hypercapnia and acidosis secondary to CO2 pneumoperitoneum in pregnant females.15 In our study, pneumoperitoneum was adjusted to 10–12 mm Hg throughout the duration of the operation.

It has been recommended to position the patient on her left side during surgery to prevent uterine compression of the inferior vena cava and to facilitate access to the appendix.17 Morrell and colleagues18 have suggested a lateral rotation of the operating table to displace the uterus for better venous return. In our study, all patients were placed in a supine position with a slight left side tilt (20–30°).

One of the most important concerns during LA in pregnancy is the potential risk of injury to the gravid uterus during ports insertion. The Veress needle or the Hasson open technique can be used to gain initial abdominal access. Even though complications have been described for all methods, spontaneous puncture of the uterus with a Veress needle is the most serious.19 Friedman and colleagues20 reported results in a young pregnant woman at 21 weeks’ gestation who underwent LA for suspected appendicitis. Injury to the serosa of the gravid uterus with the Veress needle resulted in postoperative pneumoamnion with subsequent fetal loss. In our study, we insert the camera port supraumbilical 3–4 cm above the uterine fundus with open method (HASSON method) according to the SAGES guidelines for laparoscopy during pregnancy.15

The risk of preterm labors with any operative interference during pregnancy was reported to be 10–15%. The same was observed after laparoscopic or open appendectomies that were reported by Kazar and Roslyn.10 The overall rate of preterm labors was one patient (3.22%) in LA.

In conclusion, laparoscopic appendectomy is distinguished by safety and efficacy throughout pregnancy and associated with good maternal and fetal outcomes, similar to those of open appendectomy. In addition to all the advantages of laparoscopy, LA is associated with shorter postoperative stay, earlier restoration of bowel function, and low incidence of trauma to the gravid uterus.