Median arcuate ligament syndrome (MALS) is a rare disease caused as a result of extrinsic compression by diaphragmatic fibers arching on the celiac artery at its point of origin from the abdominal aorta. Patients suffering from MALS presented with weight loss, nausea, vomiting, and postprandial epigastric pain. Often misdiagnosed with dyspepsia or acid peptic disease, this syndrome is a diagnosis by exclusion, after excluding commoner causes of the upper abdomen pain. It is diagnosed with computed tomographic (CT) angiography and treated with various modalities, including laparoscopic or open division of fibers of MAL, which cause extrinsic pressure. We report a series of three cases of MALS diagnosed and managed at our center, using laparoscopic division of the fibers and release of the celiac artery.

An estimated 10–24% of people may have indentation of celiac artery caused by an abnormally low placed ligament.6 But only a minor fraction will have a clinically significant disease.

The clinical presentation of celiac artery compression include weight loss, nausea, vomiting, and abdominal pain, which are particularly aggravated after a meal.3–5 The condition may sometimes present atypically with exercise-related abdominal pain/diarrhea12 (more in athletes), or rupture of a pancreaticoduodenal artery pseudo-aneurysm (due to post-stenotic dilatation of celiac trunk).7,8

MALS is a diagnosis of exclusion. A strong clinical suspicion is required in making the diagnosis of this syndrome. The diagnosis of significant celiac axis compression was previously made with conventional angiography. However now, it can be very well diagnosed with the three-dimensional computed tomographic (CT) angiography.2 Convensional angiography/plasty of the celiac artery is now only used either as a primary treatment modality9,10 or for postoperative stenosis.11

The primary treatment options for management of this syndrome are either open or laparoscopic division of fibers of MAL, or angiographic stenting of the celiac artery in resistant cases. Robotic surgery has also been projected as a treatment option in recent days.

We report a case series of three cases of MALS diagnosed and managed with the laparoscopic approach at our center. 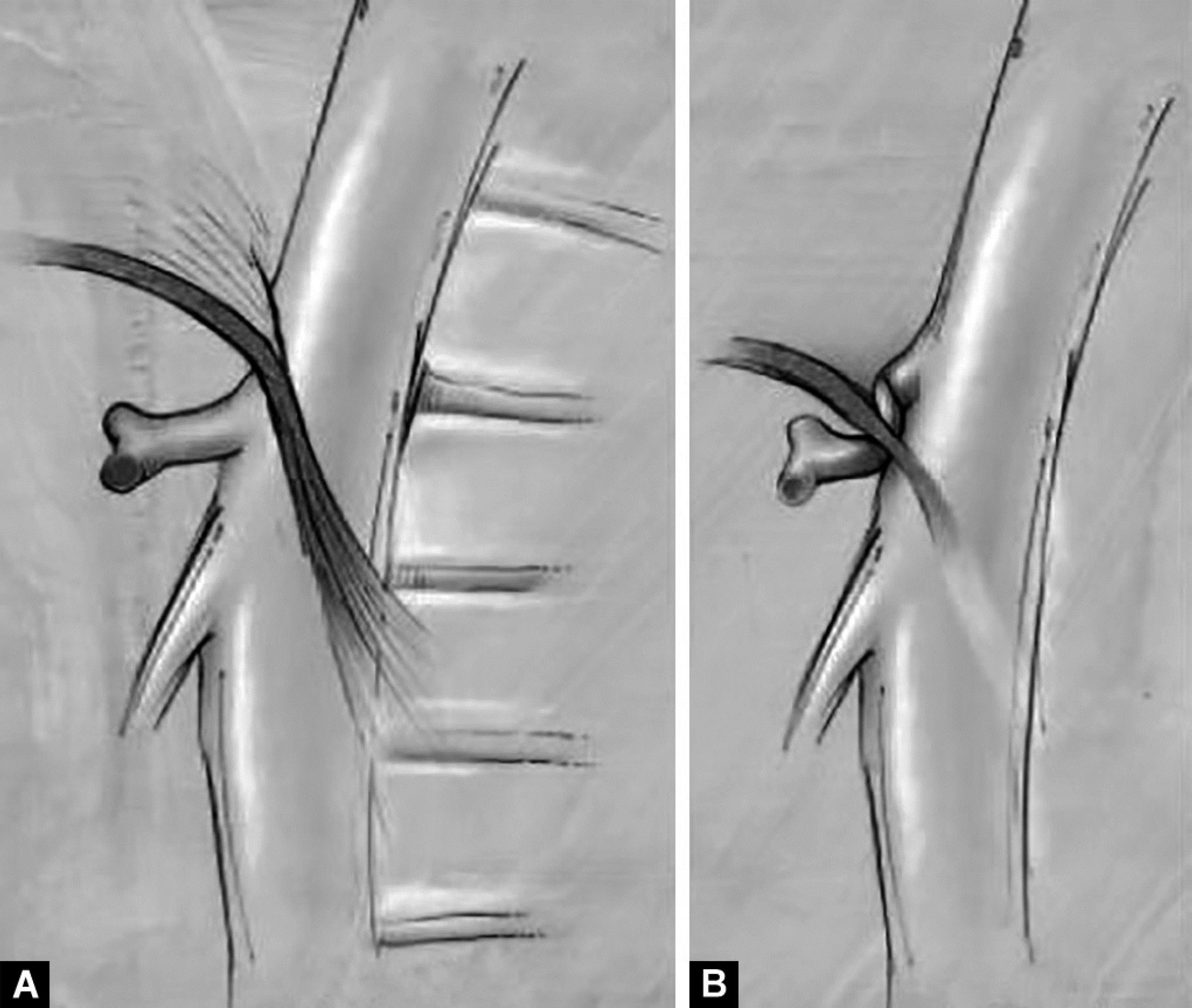 Figs 1A and B: (A) Normal anatomy of ligament crossing anterior to aorta; (B) In MALS, it crosses the proximal portion of the celiac trunk, causing indentation 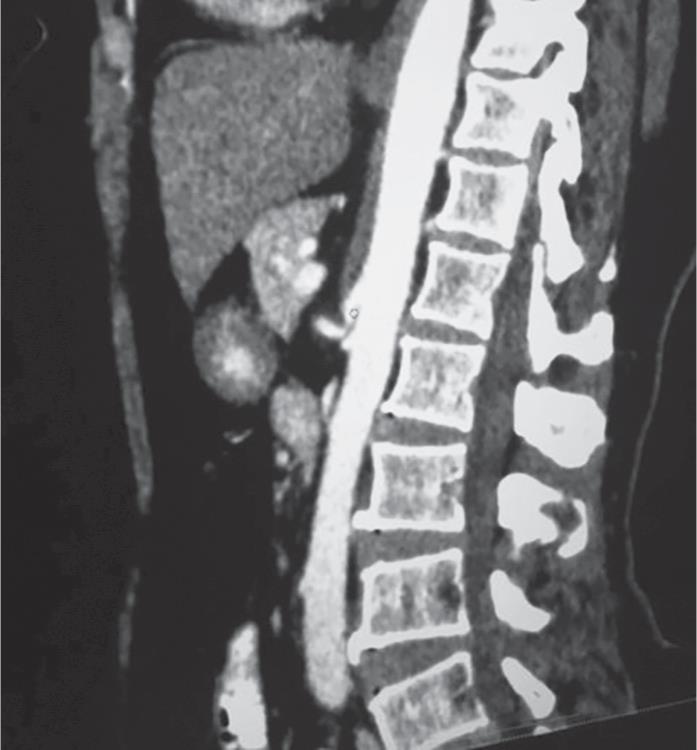 Fig. 2: A CT angiography image of the patient (sagittal view) showing compression of the celiac trunk with post stenotic dilatation 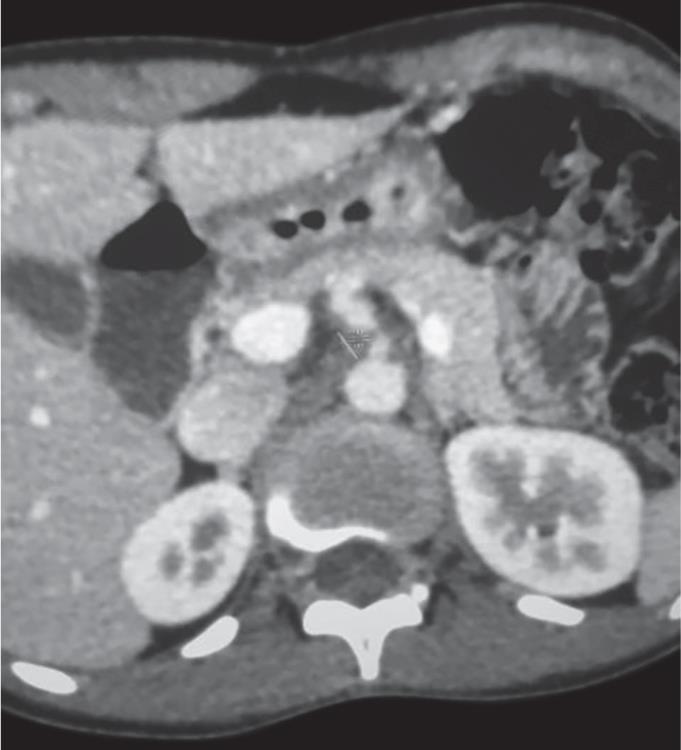 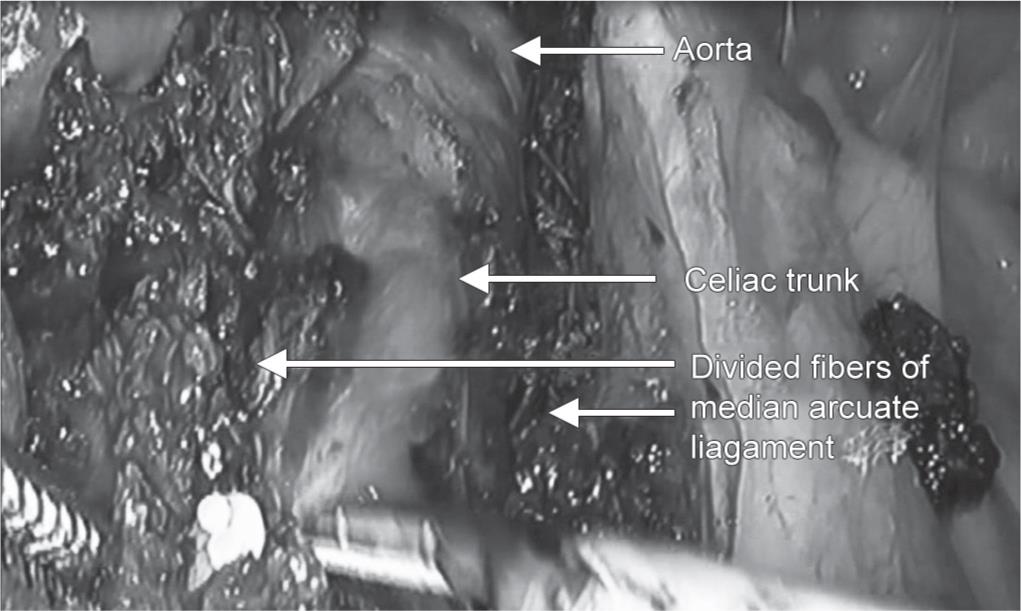 Fig. 4: An intraoperative image of the celiac trunk after division of the fibers of median arcuate ligament

The patient is placed in a supine position with leg split and in a head-up position. The aorta and diaphragmatic arches identified and dissected until the origin of celiac artery. Any external compression on the artery is released and the artery is completely skeletonized.

A 52-year-old gentleman came with the complaints of severe postprandial abdominal pain for 6 months, a history of vomiting since 1 month and a history of approx 15 kg loss of weight in last 6 months.

Upper GI endoscopy shows grosive gastropathy and colonoscopy was normal. CT angiography of the abdomen showed a high-grade stenosis at the origin of the celiac trunk without any significant intraluminal plaque or calcification (Figs 2 and 3).

After trial of conservative management for erosive gastropathy, as the patient was refractory, diagnosis of MALS was made and taken up for surgery.

Postoperatively, liquids were started on 2nd POD, a soft diet on 4th POD, and then the patient was discharged. On a serial followup up to 2 years, the patient is significantly pain free, tolerating the diet well.

A 22-year-old lady came with chief complaints of severe epigastric abdominal pain aggravated for 5 days, with a history of similar complaints for the last 2 years, and moderate severity aggravated by food intake. A history of nausea was present on and off. No history of vomiting or fever was found to be associated with the symptoms. A history of approx 10 kg loss of weight was present in the last 6 months.

Postoperatively, liquids were started on 2nd POD, a soft diet on 4th POD, and then the patient was discharged. On serial follow-up up to 1 year, the patient’s post prandial abdominal pain has significantly resolved. She is tolerating oral diet well.

A 44-year-old female with chief complaints of severe pain abdomen with anxiety and insomnia since 6 months. No history of vomiting or nausea. History of approx. 12 kg weight loss in the last 6 months.

Upper GI endoscopy and colonoscopy were normal. CECT abdomen revealed significant compression of the proximal part of the celiac artery by fibers from diaphragmatic crura—suggestive of MALS.

The patient underwent laparoscopic release of the fibers causing compression. Postoperative liquids were started on 1st POD, a soft diet on 3rd POD, and then the patient was discharged. On serial follow-up upto 9 months, the patient was significantly asymptomatic.

In this study, three patients were evaluated, diagnosed, and treated by laparoscopic division of diaphragmatic fibers.

Two of the three were females. The mean age at presentation was 39.3 years (22–52). All 3 patients presented with upper abdominal pain, which was not responding to conventional PPI therapy. The mean weight loss of 12.33 kg was reported (10–15 kg). The length of symptoms at presentation was a mean of 12 months (6–24).

On evaluation with CT angiography, all 3 revealed significant compression of the celiac trunk at its origin from aorta. All three patients underwent laparoscopic division of MAL fibers. None of the patients required conversions to open.

The length of the postoperative stay ranged from 3 to 4 days, with all patients being discharged with no postoperative complications or morbidity. On average, followup of 15 months (9–24) showed that all three patients remained symptom free and tolerated diet well.

Since the first description of MALS in 1961, there are several debates on the diagnosis and treatment of this rare clinical entity.

The mean age of presentation in our study is around 39.3 years, which correlates with the literature quoted age of 47 years.4 However, many studies quote a younger age of presentation, around 2nd or 3rd decade of life. Two of the three patients were females, in accordance with most cited literature mentioning more prevalence among female population.

Our study demonstrates successful management of MALS with a multidisciplinary approach. This condition is diagnosed mostly on initial duplex ultrasound imaging followed by UGI endoscopy and contrast CT angiography of the abdomen and is managed with laparoscopic division of median arcuate ligament fibers.

Selecting patients for laparoscopic treatment of MALS is a clinical challenge. Most cases are misdiagnosed and managed for a long time with PPIs and other supportive treatment. Diagnosis of MALS requires a high degree of clinical suspicion along with appropriate investigative workup. It is further complicated owing to a high prevalence of asymptomatic anatomic compression of celiac artery on CT overlapped with pain abdomen. Hence, probably, the diagnosis of MALS can only be confirmed postoperatively if the patient is significantly relieved of the symptoms after release of MAL fibers.

Once the diagnosis of MALS is made, the next challenge is to select the approach to divide the MAL fibers. Various methods have been proposed, including open approach, laparoscopic, robotic, and retroperitoneal endoscopic. Van Petersen et al.21 demonstrated a retroperitoneal endoscopic MAL release and Relles et al.22 reported a robotic-assisted MAL release technique. A minimally invasive approach has obvious advantages in this group of relatively young cohort. Laparoscopic approach has gained significant popularity over time, surpassing open approach in most cases, as an initial treatment approach.

We, at our center, recommend laparoscopic management owing to the basic advantages of minimal invasive approach clubbed with acceptable learning curve and ease along with excellent visualization of the celiac trunk origin and the MAL. In our study, a laparoscopic approach was associated with no perioperative morbidity, a short hospital stay, and minimal blood loss, with acceptable results and patient satisfaction, consistent with other reports.13–20 Patients were followed up at 1 month and then every 3 months till 2 years. All the patients were asymptomatic at follow-up.

Despite the acceptable satisfaction rates, a subset of MALS patients may remain refractory with partial or no relief of symptoms or may have recurrent symptoms, requiring further intervention like angioplasty or stenting.

Limitations of our study is the small number of cases, owing to rarity of the disease.

MALS is a rare clinical disease, requiring high clinical suspicion for diagnosis. Management includes surgical division of MAL fibers. Laparoscopic management is gaining popularity and recommended owing to the basic advantages of minimal invasive approach clubbed with acceptable learning curve and ease of performing, along with excellent visualization of the celiac trunk origin and the MAL.