A Comparative Study of Weight Loss and Reduction in BMI after Gastric Imbrication, Sleeve Gastrectomy, and Roux-en-Y Gastric Bypass

Background: Obesity is a worldwide epidemic and exercise supplemented with pharmacotherapy has poor long-term results; thus, bariatric surgery is the mainstay therapy for morbid obesity. But reduction in weight and BMI after bariatric surgery is not the same and mainly depends on the type of surgery performed.

Materials and methods: Total of 40 morbid obese patients underwent different types of laparoscopic bariatric surgery and were followed for 1 year. Reduction in weight and BMI after 1 year was correlated with the type of bariatric surgery performed.

Obesity is a medical condition in which excess body fat has accumulated to the extent that it may have a negative effect on health.1 The main cause of obesity and overweight is an energy imbalance between calories consumed and calories expended.

A prospective study was conducted at MGMMC and Maharaja Yashwantrao Hospital, Indore in the Department of Surgery. A total of 40 morbid obese patients aged between 19 years to 50 years and BMI ≥40 kg/m2 or BMI ≥35 kg/m2 with obesity-related comorbid conditions like diabetes mellitus, hypertension, and dyslipidemia were included in the study from July 2014 to April 2016. The same team of surgeons was involved in all the cases.

All patients fulfilled the NIH criteria4 and were thoroughly evaluated preoperatively, and the type of bariatric surgery was explained to the patients and was selected by them, with written informed consent for the same. Patients were followed up at 2 weeks, 1 month, 6 months, and 1 year postoperatively. Weight, BMI, excess weight loss, random blood sugar, systolic and diastolic blood pressure, and any complication following surgery were documented at each visit.

P-value of less than 0.05 was considered statistically significant. 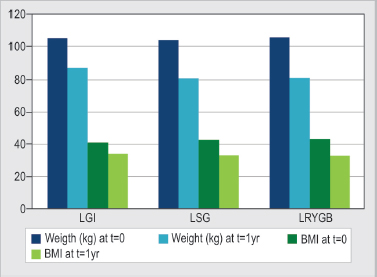 On comparison of preoperative weight and BMI to the corresponding variable 1 year after surgery, the weight loss and reduction in BMI were statistically significant in all the surgery groups.

Dietary therapy with exercise supplemented with pharmacotherapy, with or without organization supervision, generally achieved only minimal and often transient effects with poor long-term results. Once severely obese, the likelihood that a person will lose enough weight by dietary means alone and remain at a BMI below 35 kg/m2 is estimated at 3% or less. The NIH consensus conference recognized that for this patient population, nonsurgical therapy has been uniformly unsuccessful in treating the problem.4

The rise in the prevalence of obesity led to increase interest in the surgical approach to treat obesity, and in 1991, the NIH established guidelines for surgical therapy of morbid obesity now known as bariatric surgery.2

A range of different bariatric procedures are available, working on principles of restriction or malabsorption or both. Along with reducing weight, some of them have been shown to reduce appetite and improve glucose homeostasis independently of weight loss. In view of its favorable metabolic effects, bariatric surgery is also referred to as “metabolic surgery.”

Sleeve gastrectomy was initially described in 1988 by Hess6 and Marceau7 during the duodenal switch and 1993 by Johnston8 in an isolated form.

The gastric imbrication procedure involves plicating the greater curvature of the stomach after the division of the short gastric vessels. It is a relatively new technique. It was initially proposed by Wilkinson and Paleso9,10 and introduced in 2006 by Dr. Talebpour in Iran.11 Since here resection of the stomach has not been performed, the decrement in the ghrelin levels is unlikely as they do in sleeve gastrectomy. The gastric imbrication procedure has a technical advantage when compared to LSG; that is, there are no resection and anastomosis of the stomach lines and thus no risk of leak from the staple line. The procedure is reversible and cost-effective.

Gastric bypass was initially developed by Dr. Mason and Ito in the 1960s.12 Over several decades, the gastric bypass has been modified into its current form, using a RYGBP limb of the intestine. In 1994, Dr. Wittgrove and Clark reported the first case series of laparoscopic RYGBP.13

Fifteen morbid obese patients underwent LSG, in which greater curvature of the stomach was cut and stapled over a 34 Fr bougie, starting from 6 cm proximal to pylorus toward the angle of His, using Endo GIA™ stapler. In our study, the effective weight loss was 53.73% after 1 year, it was 66% after 36 months in a study conducted by Himpens et al.,14 and 54% after 12 months reported by PP Cutolo et al.15

Fifteen morbid obese patients underwent LGI, in which greater curvature of the stomach was plicated over a 34 Fr bougie, the first row of extramucosal continuous suture, and a second layer of interrupted suture. The effective weight loss was 43.53% after 1 year, it was 61% after 12 months in a study conducted by Talebpour and Amoli,11 and 67.1% after 12 months according to 2011 Skrekas et al.16 publication.

Ten morbid obese patients underwent LRYGB, in which 30 ml gastric pouch and 50 cm of Roux-limb were created. The effective weight loss was 55.37% after 1 year, it was 60.5% after 12 months in a study conducted by Karamanakos et al.,17 and 62% after 36 months according to Kehagias et al.18

There were no intraoperative complications. Postoperative on the first day, nausea was reported by most of the patients, which resolved gradually by antiemetics. There were no other significant postoperative complications. Deep vein thrombosis (DVT) prophylaxis was given to all. Patients were discharged when their vitals were stable able to accept liquid diet and could tolerate pain. Postoperatively patients were advised to have liquid diet for 10 days, proton pump inhibitors for 3 months, and multivitamins. Follow-up visits were scheduled at 2 weeks, 1 month, 6 months, and 1 year postoperatively.

© Jaypee Brothers Medical Publishers. 2021 Open Access This article is distributed under the terms of the Creative Commons Attribution 4.0 International License (https://creativecommons.org/licenses/by-nc/4.0/), which permits unrestricted use, distribution, and non-commercial reproduction in any medium, provided you give appropriate credit to the original author(s) and the source, provide a link to the Creative Commons license, and indicate if changes were made. The Creative Commons Public Domain Dedication waiver (http://creativecommons.org/publicdomain/zero/1.0/) applies to the data made available in this article, unless otherwise stated.