Aim and objective: To compare the various parameters and outcomes between early and delayed laparoscopic cholecystectomies with safety and feasibility evaluation.

For symptomatic cholelithiasis, laparoscopic cholecystectomy (LC) is a gold standard treatment. The timing of LC in acute calculus cholecystitis is still a matter of considerable debate and related controversies. Before the laparoscopic era, randomized studies revealed that the strategy of early open cholecystectomy within 7 days of the onset of symptoms was preferred as it provided shorter hospital stay and reduced potential risk of complications, such as pancreatitis, gangrenous, or emphysematous cholecystitis, without an increase of postoperative morbidity and mortality.1,2

Till 1990, acute cholecystitis was considered as a contraindication for LC due to increased postoperative morbidity, longer operative time, and higher conversion rate.3,4 Consequently, delayed LC (DLC) was preferred after conservative medical treatment on the assumption that inflamed tissue is more vulnerable to laparoscopic intervention and may increase the risk of complications. In the last 15–20 years, as the surgeons excelled in laparoscopic surgeries, with improvement in laparoscopic devices and instruments, even acute cases were considered for LC. Randomized trials and meta-analysis have demonstrated that there was no difference in early LC (ELC) and DLC groups in terms of conversion rate, bile duct injuries, postoperative morbidity, and mortality. Moreover, the ELC group has reported the significantly shortened hospital stay and incurred low cost.5

Despite the evidence, DLC is still preferred in clinical practices due to controversial timings for LC in cases of acute cholecystitis.6,7

This study was a prospective randomized interventional study conducted in the Department of Surgery, at Postgraduate Institute of Medical Sciences and Research and Employee State Insurance Corporation Model Hospital, New Delhi, India from October 2017 to February 2019 after approval from the institutional ethical committee. Written and informed consent was obtained from each patient for inclusion in the study, LC, and conversion to open.

Acute cholecystitis patients admitted to the Department of Surgery of age from 18 to 60 years of either sex, with the American Society of Anesthesiologists (ASA) grade I and II, were included. Right upper abdominal pain, temperature more than 98.6°C, total leukoctes counts (TLC) more than 10,000/dL, or both, and presence of gallstones, thickened and edematous gallbladder (GB) wall with pericholecystic fluid were considered as diagnostic criteria. Finally, intraoperative findings were reckoned as diagnostic for acute cholecystitis.

Sample size calculation was done on the basis of the study of Gutt et al.8 in which the overall complications were 14.1 and 40.4% in early group and delayed group, respectively. Considering the 80% power and 5% level of significance, the minimum number of patients required was 40 in each group. The sample size was increased by 10% on the basis of the assumption of nonparametric statics and dropout, and finally we consider 50 patients in each group.

Block randomization with a sealed envelope system was used. We prepared randomly generated ten opaque sealed envelopes assigning A and B in five blocks each: A represented the ELC group and B represented the DLC group. Patients who underwent LC within 72 hours of symptoms were included in the ELC group, whereas LC done after 6–12 weeks were included in the DLC group. These patients were initially managed conservatively (broad-spectrum intravenous antibiotics and intravenous fluid resuscitation) and discharged when asymptomatic.

Data were collected from the index admission of patients, which included age, sex, associated comorbidities, BMI, past history of biliary disease, history of previous abdominal surgeries, duration of symptoms, and clinical examination. Other data included were laboratory, radiological, intraoperative, and postoperative parameters.

Conversion to open cholecystectomy was done through right subcostal incision during difficulty in dissection, excessive bleeding, and adhesion of Calot’s triangle. The drain was removed after 24–72 hours postoperatively. Surgical procedures were performed by surgeons having more than 5 years of experience of LC in a single surgical unit. All patients were allowed to eat and drink 6–8 hours postsurgery, in the absence of nausea or vomiting. Intramuscular diclofenac injection was advised for pain relief. Antibiotics were prescribed as per hospital protocol.

A total of 145 concordant patients were assessed for the study, out of which 45 patients were excluded as per criteria (Flowchart 1). The comparison group had 50 patients each with post-randomization at the final analysis. As shown in Table 1, both groups were comparable and equally distributed in respect of age, sex, body mass index, laboratory reports, radiological parameters, and comorbidities. There was no failure of conservative treatment in the delayed group which required urgent surgery. Various parameters were observed and evaluated pre-, intra-, and postoperatively. 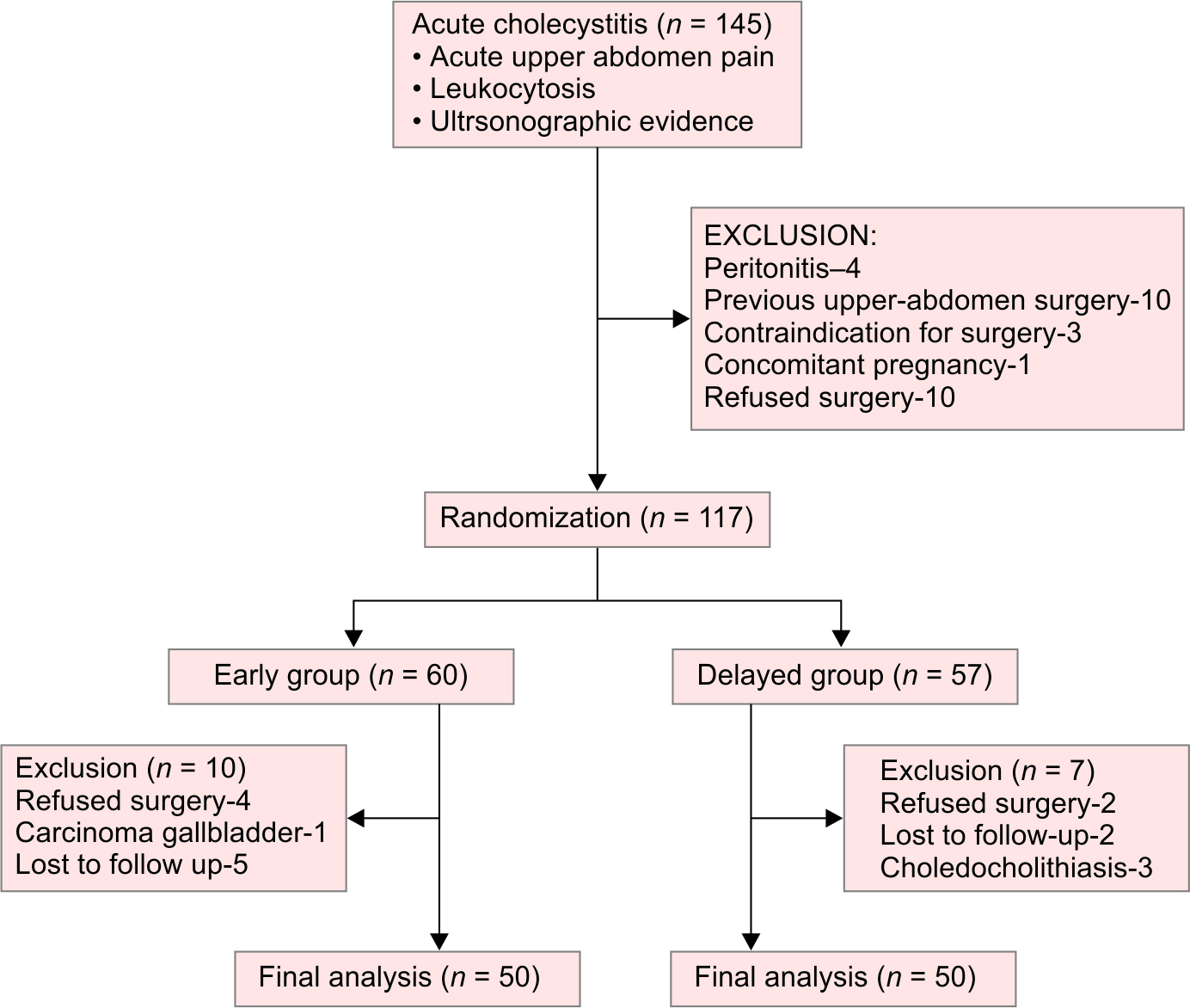 Flowchart 1: Consort flow diagram of the various stages of trial

Conversion to open cholecystectomy and achievement of critical view of safety were comparable in both the groups. The adhesion in Calot’s triangle, adhesion with the inferior surface of the liver, tensely distended GB, and mucocele/pyocele were more common in the ELC group (p <0.010) (Table 3).

More operative modifications were required in the ELC group, viz GB decompression, laparoscopic bag retrieval of a specimen, suction/irrigation, and subhepatic drain placement. No significant difference was noted in both the groups with intraoperative complications, like bile/stone spillage, GB perforation, and cystic artery bleed. No bile duct injury occurred in both the groups. One patient in the DLC group had an accessory bile duct leak, which was identified by magnetic resonance cholangiopancreatography and managed conservatively (Table 3).

Multiple causes were found in both the groups for conversion as shown in Table 4, which were comparable and statistically not significant. Cholecysto-colonic fistula and Mirizzi syndrome were found in one patient of the DLC group.

Total hospital stay was 4.46 ± 1.32 vs 6.0 ± 2.83 days in ELC and DLC groups, respectively. The difference was statistically significant p <0.002. Statistically no difference was found in subhepatic drain duration and postoperative hospital stay. The requirement of postoperative analgesia and use of antibiotics were comparable in both the groups. The postoperative complications in terms of pulmonary, wound infections, intra-abdominal infections, and bile leak were similar in both the groups (Table 5). Feature of acute cholecystitis on histopathological examination was more prevalent in the ELC group (p <0.001) (Table 6).

On ultrasound screening, gallstones are found in 5 to 20% of the adult population.9 The gallstone-related complications, such as acute cholecystitis, develop in 1 to 4% of patients.10 Acute cholecystitis is the most frequent cause for hospitalization among all gastrointestinal diseases.11 For symptomatic cholelithiasis, LC is “the gold standard” for definite treatment. LC in acute cholecystitis is still considered a challenging procedure due to anticipated anatomical difficulties. Traditionally, elective cholecystectomy is preferred after weeks of strict medical therapy, called “cool down”. In the interval period, more than 20% of these patients do not respond to medical treatment or develop recurrent cholecystitis. This leads to multiple readmission and emergency surgery in more than 50% of patients.12

For good outcomes, “the timing of surgery” is of great significance. Preferably, the surgery should be performed promptly after the presentation at hospital. The norm of early surgery within golden 72 hours of symptoms in acute cholecystitis has been advocated, which has been proven safe and feasible.13,14

Merely, such early surgery in clinical practice is not always possible due to logistic difficulties and the availability of experienced surgeons in an emergency. The timing for surgery in the early group varies from 72 hours to 7 days, whereas it may vary from 6 to 12 weeks in the delayed group We performed LC in the ELC group within 72 hours of symptoms whereas in the DLC group, 6–12 weeks after the symptoms. The bile duct injury remains the most important entity for comparison of the outcome, safety, and feasibility of the study.

In our study, the mean blood loss was significantly more in ELC than DLC group, because of inflammatory reactions leading to neovascularity, adhesions around GB, and Calot's triangle in the acute phase of acute cholecystitis (82.60 ± 59.67 vs 65.40 ± 74.21 mL; p <0.007). However, no patient required blood transfusion. Similarly, recent studies reported more blood loss in the ELC group.17,18

The higher conversion rate obviates the advantage of ELC. However, various meta-analysis of randomized studies showed that conversion to open surgery in ELC and DLC groups ranged from 12.7 to 20.7% and from 13.9 to 23.6%, respectively.15,20–23

There were different reasons for conversions in the comparison groups:

ELC group: The edematous, friable, and distended GB perforated when grasped and bleeding.

DLC group: Contracted GB, dense adhesions, and difficult exposure obscured the Calot's triangle due to chronic inflammation.24 Our study found the conversion rate 5 (10%) and 7 (14%) in ELC and DLC groups, respectively.

The increased duration of operation from 10 to 30 minutes for the ELC group as compared to the DLC group was demonstrated in studies.15,17,19,25–29 We found the duration of operation was 77.30 ± 20.07 and 66.94 ± 29.5 minutes in ELC and DLC groups, respectively (p <0.001). The significant increased operative time in the ELC group was due to inflammation, edema, thickened and distended GB, adhesions, and bleeding, which required more operative modifications. The most common technical modifications included the following: (i) GB decompression to facilitate better grasping and exposure of Calot’s triangle. (ii) The liberal use of suction and irrigation devices required for dissection and control of bleeding. (iii) The use of laparoscopic specimen retrieval bag for stone and GB extraction to avoid port-site infections.16,26 Reversely, Abdelkader and Ali,27 Kohga et al.,25 and Chhajed et al.30 have demonstrated that the DLC group had more operative time (Table 7). The increased operative time in the DLC group may be because of maturation of the surrounding inflammation leading to fibrosis, dense adhesions, and scaring and contracted GB, which makes dissection difficult.

The risk of postoperative wound infection varies in studies. The risk of postoperative infection was twice as high in the DLC group as in the ELC group, as reported by Sánchez-Carrasco et al.18 (OR = 1.98; 95% CI 1.78–2.17; p <0.05),18 whereas Gurusamy et al.21 reported a higher proportion of infections in the ELC group. We found that the wound infection was comparable in both the groups (p = 0.423).

The overall complication rates were significantly less in the ELC group or comparable with the DLC group as in various studies (Table 8). A meta-analysis suggests that overall morbidity was statistically insignificant in both groups.15,19,28

Studies showed that ELC was more economical and resulted in a better quality of life.32–34 This may be due to shorter hospitalization and devoid of conservative treatment in the ELC group. We are working in the government-funded hospital; the cost of treatment was therefore not assessed as it was free.

ELC in acute cholecystitis is safe and feasible in comparison to elective cholecystectomies. ELC avoids recurrent symptoms due to multiple episodes of acute cholecystitis and is a definite treatment for cholecystitis in failed conservative management Moreover, ELC is more advantageous as it provides patients safety and lesser hospital stay. It has economic benefits due to lesser morbidity and mortality.

Authors gratefully acknowledge the help of Dr Subhajeet Dey, Dir. Professor of Surgery, ESI-PGIMSR and Model Hospital, Basaidarapur, New Delhi, in the revision of this manuscript by doing peer review and valuable suggestions.